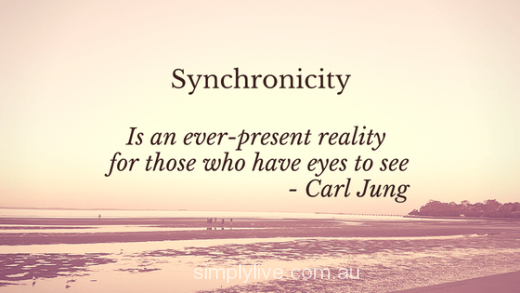 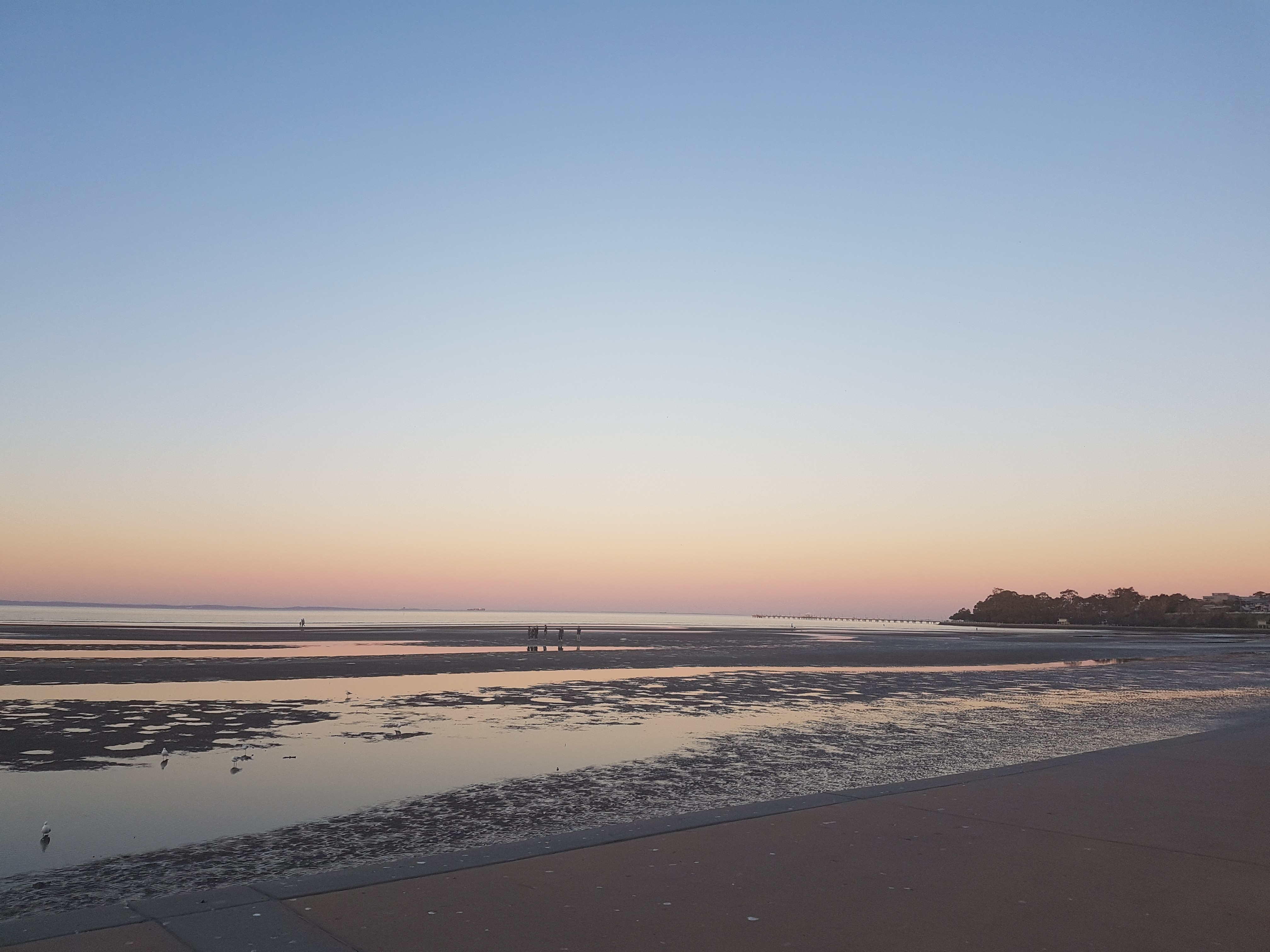 Trusting yourself, life, that things will work out, letting go of perceived control, living the life you want, not holding back because you are worried about outcomes. That is the power of synchronicity.

What all of these things indicate to me (partly or wholly) is that people have lost trust. Trust in their abilities, trust in our society/community, trust in humanity; and/or trust in the Universe/Spirit/God to KNOW that things will just be ok and work out exactly as it should. To me, once you just start to TRUST all these things and push that perceived control away from yourself, synchronicities happen; and moreover, are your “reward” to show you that your trust in Trusting is on-point.

Since I made the decision to move away from owning businesses, give up a stable home base, spend some time traveling, the synchronicities have been HUGE. Not only after I made the change, but in so many decisions and actions in the process leading up to it. While I was away, the synchronicities were off the charts -the timing of pet-sits and travel, the people I met and their connections to me or my situation, and the timing of meeting the same people in different places and times and so on. WAAAAY too regular to be “coincidence”. And it has not stopped here in Australia, now that I am home. I am largely living the same way, and things have just “work out”. Don’t believe me? Well, I’ll detail some examples below, any one of which could be coincidence, but when considered together, and with all the other examples I have forgotten to mention, it is just ridiculous.

My point being this. Until 12months ago I was doing “all the right things” in trying to live my life, AND yes doing things I DID enjoy and feel passionate about. And yet everything I did hit a brick wall. The more I was determined to double-down on my efforts and keep at it, the bigger the bricks got and the faster they stacked. You know, the great old philosophies of “Never Never Quit” (I actually had this sitting on my desk); The Darkest Before the Dawn; Persistence Pays etc etc. Then the walls closed around me & I threw my hands up and said “I have no idea what I am going to do, but I’m not doing this anymore” and the synchronicities came rolling in, faster and faster. Things became easier, SO much easier. I had moments of screaming doubts, as my warehouse/business emptied out, my house emptied out, I said my goodbyes to friends/family, I said goodbye to the old ME. Of course I did. But then everything rolled together so quickly, it was like a freight train I could not stop, even if I’d truly wanted to. I had NO idea what I was going to do in the next weeks or where it would lead me. I really still don’t. But I know it is just right. Because here I am, a year later, almost earning no income, and not only surviving, but THRIVING. Every time I turn around, something large or small happens to allow for my continued sustenance, and allows me to TRUST that it will continue to happen through my retirement and beyond. It will be ok. I will be ok. And better than ok. I can thrive.

I am constantly rewarded for Trust. Not by “society”, because many of my friends/followers don’t get it, and worry for my future welfare, which is lovely of them. But I am rewarded by my life, by the Universe (or whatever terminology you would like insert here). It is splayed out for me as obviously as the relationship of working x hours at a job and getting $x in return. The more I just shrug when asked what I’m doing next, the more I’m presented with opportunities for survival; but even more – with opportunities for simply LIVING a beautiful, connected life.

I hope I can inspire others to do the same, in whatever small or large context is relevant to them. Not just the plastic words and robotic actions of someone who truly does not believe it will be ok but is “trying” to let go.  Of someone who has attended a personal development seminar and heard the concept, and want to follow the word of a “guru” just because of the personal power of the guru, but without the internal belief themselves. But to just let go and have faith that whatever the outcome is, will be TOTALLY right and will accept it, even if it is the polar opposite of what was hoped for, or thought would happen. To lose attachment to the outcome and just live for the process and the moment. To let go and listen to the synchronicities. If things seem to just “flow” in one direction and not others, let the flow take you there. TRUST.

TRUST it is meant to be.

A working example of my two staples – Food and Shelter…

A few days before leaving Melbourne to drive to Brisbane, I posted onto my facebook page that I would arrive on around 4 May, if anyone needed any pet/house sitting done in the month or so after that. I also started looking on Trusted Housesitters for new assignments in Brisbane.  A friend asked me to sit from 17th to 21st May, and I secured a pet-sit from 8th to 11th June, with the latter suggesting I come on 7th to get to know the dogs’ routines. Obviously there were quite some gaps in between, but it was a start, and I wanted a little time with friends and family once I arrived before I started my sits.

Late one evening, while visiting friends and relatives before the 17th, I saw two short pet-sits in north Brisbane for the same days. I was tired and tossing back and forth which one I would hope to get, then decided to sleep on it and apply in the morning. When I did so, a new listing was given, an almost-perfect 2-week sit between the jobs I already had, in a suburb I really loved. I applied, and after they contacted me asking me to visit them to discuss, I realised the jobs overlapped by a day. I would not take on a job like that, without the clients’ permission, because they trust me to be there all the time. So I thought I would just go and see if I really liked the people and the job and if they were actually keen on me anyway; and if so, would ask for their thoughts. The pet-sit host and I got out famously, and my short “pop-in chat” turned into several hours and I completely forgot to talk to them about the timing problem. Then as I got to the door to leave, she then also remembered to tell me something important – that she’d listed her dates incorrectly, and would I still be ok to arrive on the 21st, not the 20th!!   So I was now booked with them 20th May to 5th June; and now only had a few days free before the next job. Perfect Timing?

I then saw a great looking pet-sit in another lovely location from 11th June (exactly tying in with the finish of my final sit) until 25th June.  I went to meet her to get all the details, and we confirmed that we were both happy for me to do this job.  As I got down to my car to leave, I saw a message from my sister (who lives alone), letting me know she had just found out she had to have a major operation on 26th June. And I text her straight back letting her know my final sit finished on 25th, and I would come straight to her that evening so I could take her to hospital the next morning and live at her house for as long as she needs me to help her around the house while she is in recovery. Perfect timing!

Now I only had 2 nights free from 17th May, until some undetermined end date in July.  Then, while completing my kitty pet sit in May/June, my hosts contacted me from Singapore, saying they may be delayed and asked if I could pet-sit until the 10th. I explained I couldn’t do the whole time, as I had a sit to go to; but to help them out I spoke to my next hosts and arranged to go there on the Friday morning 8th, and just drop in and meet the pups and see their needs for a few hours Thursday 7th, rather than stay the night. And then popped back a few times to feed and check on my kitty-friend  on Friday evening, twice on Saturday & again on Sunday until the owners returned.  While it was a bit of a hassle, it was really no problem; and got them out of a sticky situation. And for me, now fully booked without even a night free, for all of the dates from 17th May. It just worked out. Like it did for me all over Europe for almost 11months.

In a less specific way, this has also happened with food since I got back to Brisbane.  Each pet-sit normally includes a small amount of food ie The hosts usually encourage me to eat anything perishable left in the fridge. My hosts in all these locations were particularly generous, pointing out quite a lot of additional foods I could and should help myself to.  I also ran a number of small group workshop/chats about my travels, asking people to bring a small quantity of healthy food/snacks as “entry fee” for attendance. The gifts I received were beautiful and perfect and NO-ONE doubled up with anyone else. EVERY item given to me was actually food I loved, yet attendees had no idea of my personal food likes/dislikes.  I had a great variety of fresh fruits and vegetables, some nuts and seeds as well as some delicious healthy snacks.

I then went to a friends’ place for coffee and she realised she had a range of food items in her pantry/fridge which were of little use to her, and she loaded them onto me before I left.  And a couple of weeks later, when meeting a friend for coffee, she handed me a bag of home-grown fruits and eggs which were overwhelming her from her acreage property. Combined with what was left at each home, I had such an incredibly small amount of food shopping needs to fill the gaps and to find a few little bits and pieces to use to tie recipes together with the things I already had.  Oh, and just another couple of interesting side notes.  In one of my early shopping trips, I completely forgot to buy the nuts which I had wanted. One of the workshop participants brought me a bag of nuts/seeds the very next day.  Sunday a week ago, I met a friend at a farmers’ markets and grabbed a couple of vegetable items, vowing to buy eggs on the way back to my car; but forgot because I was having such a lovely chat. It was the next day I was handed beautiful organic home-grown eggs by my friend over coffee.